Nittany Mountain Trail Rides has furnished Tennessee Walking Horses to Bird Dog Field Trials for forty years. Judges, handlers, and spectators require smooth riding, gaited horses for the long hours in the saddle. These sure footed mounts will endure difficult terrain and weather while remaining easily on task so that the rider can focus on the dogs as they compete.

Starting in late August and continuing though November and in the Spring from March thorough May, the horses will be at field trials in Canada and the Middle Atlantic States. One group of horses will go to Grouse, Woodcock, and walking trials, and the second group goes to horseback trials. Four gooseneck trailers and trucks travel hundreds of miles each year providing mounts for the field trialers.

The owner and the staff often compete with their own dogs in a variety of field trials. English Setters, English Pointers, and Brittany's compete in amateur and open shooting dog stakes. White Spider, a female English Setter is the Runner-Up Champion of the Middle Atlantic States Championship and has been a successful competitor from Canada to Alabama and qualified and competed in the Nation Shooting Dog Championship. 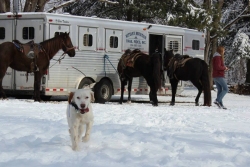